On the 20th June 2021 the club celebrated its 40th anniversary in a fun-filled evening in the clubroom that had been transformed into a 5 star restaurant.  After a welcome from the club’s president, we were treated to a light-hearted. history of club by the ‘Orewa Bridge Club’, reminiscing about its inception and changes that it had seen.  A unique game cleverly named as Bridgego, that could be described as a Variation on a Theme of Bingo, produced much excitement.  A delicious feast followed, after which members were entertained by the Wombo Combo, a jazz band from Orewa College which delivered a strikingly, professional performance.  We were delighted to welcome two of the club’s founder members who, with much skill, ceremoniously cut the fine, decorated, anniversary cake made by one of the club’s more culinary adept members.  Throughout the evening, committee members read out jokes and quotes all relating to bridge which produced much laughter.  One of our senior members and past president entertained us with a couple of amusing ditties whilst another past president provided details of the club’s history.  Two more members produced a laugh with their ‘genie of the lamp’ sketch.  At the end of the evening, members were invited to take a copy of the club’s 40th Anniversary booklet. 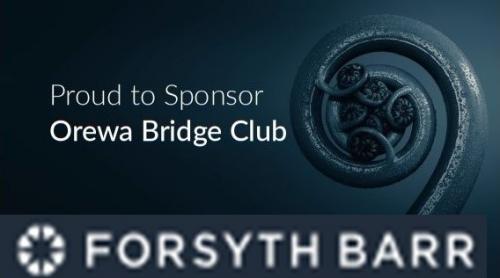